The Great Tomato (& Other Veggies) Experiment - Part One
by Carole Schwalm 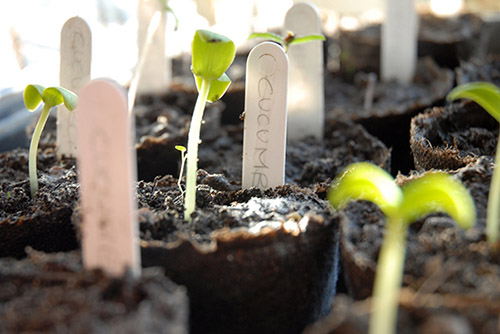 Fertilizer does no good in a heap, but a little spread around works miracles all over. (Richard Brunsley Sheridan)

Welcome to an 'experiment' in which all of the vegetables were planted at the same time and the experiementees all reside in the same physical environment. They received identical sunshine. They were cared for in the same way.

A. Our first group consists of plants grown in last year’s soil, period. To date we have a grand total of five cherry tomatoes on the two experimental plants, but we have lots of dried up blossoms that obviously won’t enhance a bacon, lettuce and tomato sandwich.

Our bean seeds didn’t come up. The cucumbers did, but the plants quickly shriveled up sans any blossoming. The potatoes came up, but even with the green, 'yes we had no potatoes.' Last year this soil wasn’t productive. What few tomatoes we had lacked flavor and cucumbers were so bitter you couldn’t eat them. The beans produced minimally.

We experimented with one plant grown from seed. We used organic soil, but until yesterday, we did not fertilize it. It is about 1/4 the size of the plants we are going to talk about next. There are only two small blossoms, but at least they didn’t fall off.

B. The next group of veggies was planted in organic soil with a fertilizer mix and are the major stars of the experiment. The tomatoes are over 5 feet tall and loaded with blossoms that, yes, turn into tomatoes! Lots of them. We’ve already picked dozens of delicious and not bitter cucumbers (grown using the same brand of seeds I used last year). We have a nice crop of beans and blossoms for future beans. I grow asparagus beans, now over 6 feet tall and the vines are promising.

This year we used organic soil, with a twist. We also added fish fertilizer, bat guano, mushroom compost, worm castings and composted cotton burrs. I conjured up a recipe so I wouldn’t over-fertilize and I must have gotten it right.

Fish fertilizer: I bought natural organic based and contains nitrogen, phosphates, soluble potash as well as fish emulsion. This product has been used for centuries.

Bat guano: The ancient Incas valued guano. Special caretakers guarded and treasured it. The guano perps were punished, even faced death, if they disrupted the bat caves. This is another source of slow release nitrogen. It contains phosphorous for root growth and potassium for strong stems growth.

Mushroom compost: This is another natural for soil conditioning and one that increases microbial activity, a requirement for vigorous soil.

Composted cotton burrs: An old and experienced gardener taught us this one during a New Mexico farm tour. The burrs contain the big three things your plants need: nitrogen, phosphate and potassium. We are high desert so appreciate anything that retains moisture and cotton burrs will do just that inexpensively. And, it goes through two seasons.

Worm castings: This is worm poop and rich in nutrients, trace minerals and natural growth enhancers. It has enough fertilizer in it for the whole season. Gardeners have experienced a 200 percent growth increases with greater height and larger crops and fewer plant diseases.

Read more about organic fertilizers in our What is Fertilizer? article.

The fairest thing in nature, a flower, still has its roots in earth and manure. ~ David Herbert Lawrence

Plants, the planet, and living things are very sensitive to chemicals in insecticides. Read the package and contemplate whether you want things like boron, a metalloid element or borax, or other things like copper, manganese, molybdenum, zinc, and chemical compounds also used in industry to strengthen steel.