Tired of winter yet? Tired of what the supermarket calls tomatoes? If you had a heated greenhouse, you could put your parka and boots on and simply walk outside, enter a semi-tropical climate and pluck a few tasty tomatoes, perhaps a nice cucumber, some fresh lettuce, and even a handful of flowers for the table (or the salad for that matter). 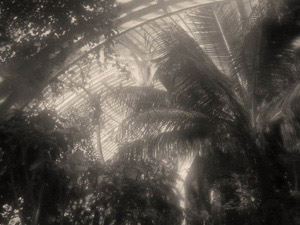 One of the first greenhouses, called a specularium, was built in 30 A.D. in Rome. This was before the invention of glass, so construction was mica. Seems, Emperor Tiberius wanted cucumbers when they ordinarily didn’t grow. In France, people wanted oranges. One “orangerie,” built in 1619 contained almost 400 trees. In the United States, George Washington constructed a “pinery” in order to grow pineapples.

Glass greenhouses arrived in 17th century. Classic greenhouses were constructed in England in the mid-1800’s. The first greenhouse in the United States appeared in Boston, Massachussetts in 1737, generally used to grow fruit.

Extending the season, not to mention increasing the potential for fresh food not normally found in your locality isn’t a new idea. In fact, it is a very old one that fell from favor it seems. You can enhance the types of veggies and fruits by planting seeds. In other words, you aren’t limited to the plants your local nursery provides. There are so many others available, and seeds provide a lot more plants than one small container at over $1.00 in cost (that would be for just one or two plants too). 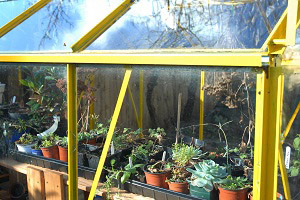 LIGHT AND OTHER THINGS

When it is sunny, a greenhouse maintains 80°. It also needs at least six hours of sunlight. An electrical connection allows you to easily provide winter heat and summer cooling. There are solar greenhouses equipped for heating (solar panels). According to Ortho Books - in 1978, scientists were experimenting with using attached greenhouses as a home heat source. A greenhouse is a heat maker, especially using a south wall. A home is a heat user, they say.

If you live in a home with a well, and/or in an area with drought conditions, think hydroponic greenhouse.

Modern greenhouses come in all sizes, styles and in all price ranges. Glass is often cheaper than acrylic plastic, but the latter will not break. You can also use corrugated fiberglass. The most inexpensive is polyethylene film.

We have a small greenhouse, but it has easily paid for itself in two years, by the amount of vegetables we’ve been able to grow and later freeze for use in the winter. We’ve saved water, an important thing here in Denver, Colorado, growing in a confined area, rather than outside in the dry Rocky Mountain air. Lastly, plants are grown in safety, away from the little voles that seemed to think I was providing food for them, not for us. 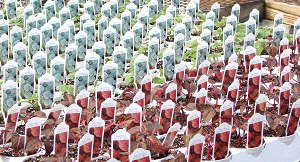 Today is January 8, 2012, and I’ve ordered seeds to start on the 23rd of the month. I purchased organic red potatoes, already beginning to seed, and they go out in the greenhouse early. The plus is that when the season starts early, harvests come quicker! You get more by rotating crops.