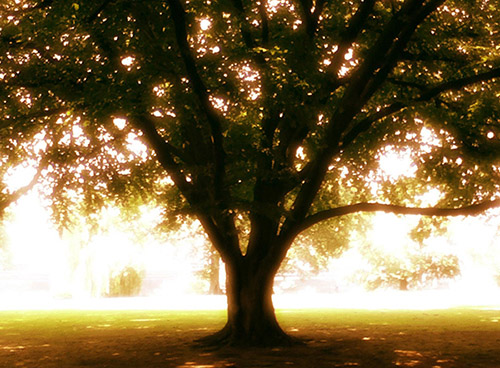 Thought about pruning? Late spring and late summer are the times to prune trees and mid-August qualifies for the latter.

When pruning: Keep the tree’s natural growth and personality in mind.
• Always remove dead or damaged wood.
• Remove lower branches and weak or stems in poor health.
• Support if necessary, especially younger trees.
• Always use sharp tools that make clean cuts – you are helping the plants, no need to hurt them while doing it.

Prune to let light, and birds, flow or fly through the branches. Open up the views through selective thinning.

The blue sky is visible through the branches allowing lots of light, yet the pruning maintains the natural look. (This technique is called windowing.)

The main limbs are in tact, the small branches between them have been removed.

While it isn’t something we think about (like rarely if ever) is that a tree should be pruned to ensure that the wind doesn’t blow it over. An overlarge canopy, or top of the tree, creates what is called the sail effect. 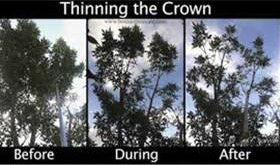 The picture to the right displays techniques for necessary pruning. There are esthetic reasons for doing so as well. 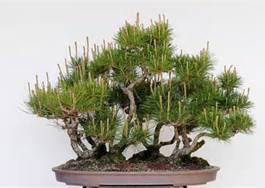 This is a bonsai plant, but it is an example of beautiful pruning that you can recreate with, for example, junipers.