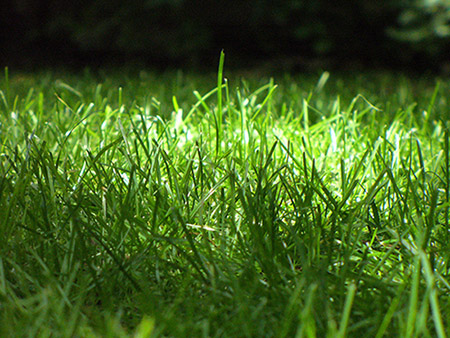 Lawn aeration is a lawn maintenance function which allows greater access of moisture and nutrients to the root level of the grass. In my years in the lawn and garden industry, I've seen a wide variety of lawn aerators (many of which didn't make their way to market...and for good reason), but most fall into one of two categories, spike aerators and core plug aerators.

Spike aerators come in a wide variety of shapes and forms, from cones, spikes and tines to shoe cleats and even 4-tine digging forks...essentially anything that could poke a few small holes in the ground. For larger lawns, thin, star-patterned spikes are attached to a rotary axel in either manual push or pull models. Wider models are available which can be attached to the hitch of a lawn tractor or ATV. Less effective than core plug aerators, spike aerators are more useful for quick applications in high run-off areas or for seeding purposes. In spike aerators, you achieve more of a trade-off. While creating a breathing hole, you're pushing the soil aside to create the hole thus increasing soil compaction in the surrounding areas.

Core plug aerators are much more effective in lawn aeration and one of the best things you can do for your lawn's health if it suffers from heavy compaction or thatch. As with spike aerators, core plug aerators are available in a wide variety of forms and shapes, all designed to rip either a spooned divot or an actual "plug" of soil up from the lawn. Professional gas powered aerators typically dig out soil core plugs which are ½ to ¾ in diameter and 1" to 6" deep. While most are designed to dig 4" to 6" deep, clay content, rocks, roots and compaction level can affect the depth of the core plug.

This is an extremely effective way to aerate your lawn. Besides the immediate access through the core plug holes, aerating also hastens the decomposition of thatch at the soil level as the plugs dissolve back into the soil. Core plug aerating also helps relieve soil compaction. Instead of puncturing the soil, the divot or plug segments are removed from the topsoil so the surrounding areas have room to expand, which, in turn, also creates more room for the grass roots.

If done at the wrong time, lawn aerating can also be one of the worse things you can do to your lawn. Lawn aerating is a violent, invasive procedure performed on the root level of the turf, so it should only be performed during high growing times of the year. For most lawns this will typically be the spring and fall, however high growth periods can vary not only by region, but also by grass species so be sure to identify your grass type and its expected growth patterns.

As well, not all lawns need aerated. Unless affected by heavy thatch or exposed to heavy traffic, sandier soils are sufficiently loose enough for strong root growth. In fact, between worms, insects and freezing and thawing, most soils stay sufficiently loose. Over a few years, however, lawns with heavier clay content or heavy traffic may start to display signs of compacting. Also, newly seeded or sodded grass should not be aerated within the first year, nor should aeration be performed more than once per year.